An important magical and plot element in our story has to do with when people were born (or, with Ren, the many ways she lies about when she was born), so we designed a whole branch of numinatria around the numerical calendrical significance of people’s birth dates. What you might call ‘astrology’, though a friend commented recently that it’s not actually astrology. While the planetary objects in our setting have associations with these calendrical numbers, it’s the numbers that matter. And now I hear Tanaquis sputtering, “Obviously! Planets don’t influence our lives. Numbers do! Far more rational!”

So, what’s up with these numbers? Well, numinatria is an esoteric magic system of numerology and sacred geometry. The numbers 0 through 10 and their corresponding shapes/planets/colors/etc. have magical associations and divine power through the Seterin godhead, the Lumen. Numinatrian ‘astrology’ is based on the Seterin calendar, which divides the 365 day year into ten months of 36 days each, and five intercalary days around the summer solstice (the Seterin New Year). These intercalary days split the month of Colbrilun, representing the division of Illi as both 0 and 10 and the break in the cycle that is death, the return to the Lumen, and rebirth.

This all means that we’ve settled on birthdates for many of our main characters — there’s a scene in The Mask of Mirrors where they even share these dates (or, in the case of several characters, lie about them). For example, Ren’s (true!) birthday in the Seterin calendar is 29s Equilun 964. In our Gregorian calendar, that transposes to 31 December 1999.

That was not deliberate, but it seems… very fitting, doesn’t it?

Anyways, here’s Ren’s full birth chart and reading for the last day of the year, a fitting celebration for finishing the draft of the third (and final) book in the Rook & Rose trilogy! 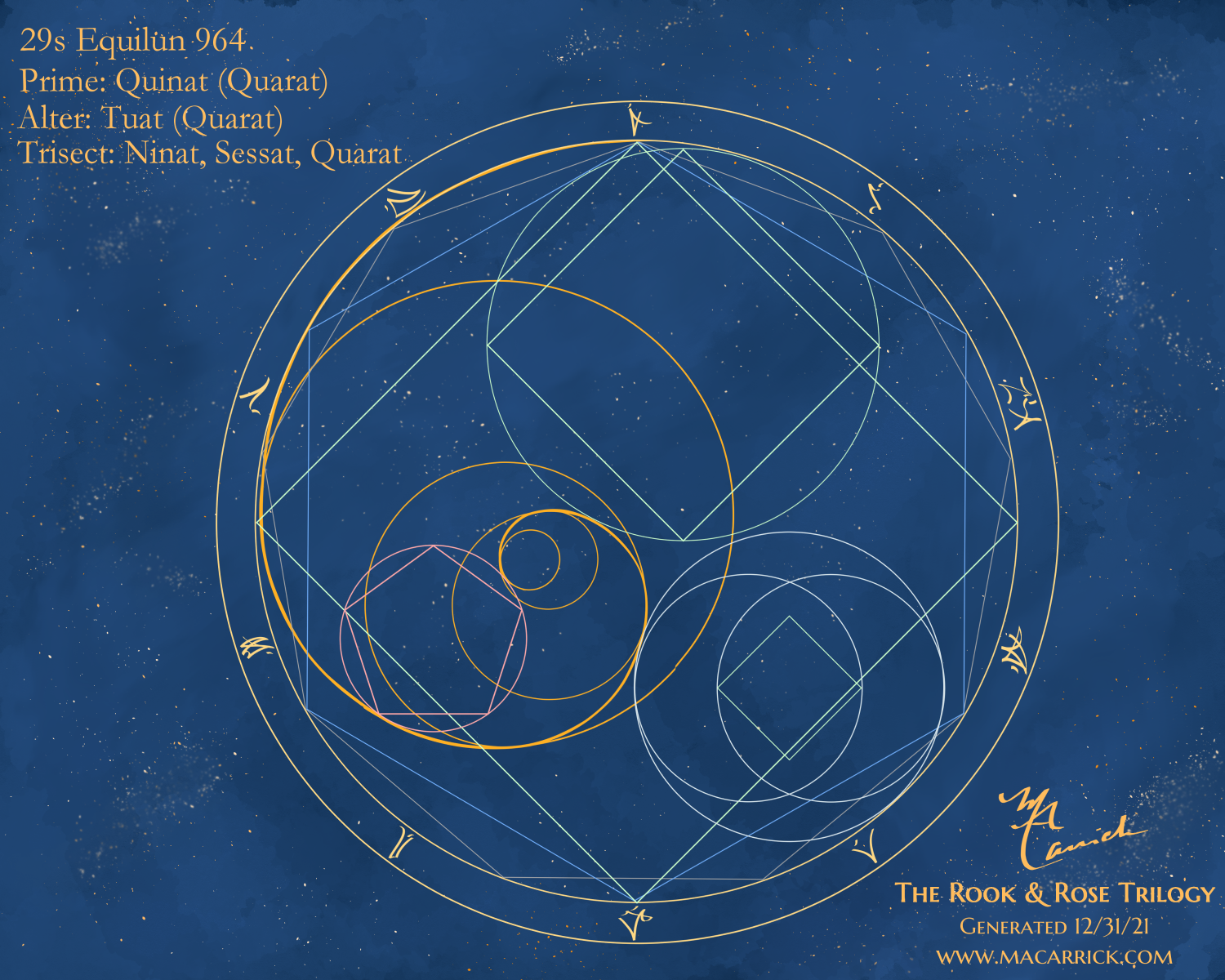 Today is the release day for THE LIAR’S KNOT, book 2 in the Rook & Rose trilogy. In Nadežra, it’s common to have an astrologer create an astrological numinat for auspicious days — births, marriages, deaths, etc. So I decided to make one for our book’s release day!

What? We created a working card deck oracle with the pattern deck. Of  course we also made a working astrological charting system!

In the Nadežran calendar, 7 December maps to 5 Equilun. Through no planning of our own, that means that THE LIAR’S KNOT releases on the minor holy day of Equilis Quinat (the fifth day of the fifth month. This is incredibly fitting for this book as Quinat is the numen associated with power, House Acrenix, the Cinquerat, and THE LIAR’S KNOT itself.

So here you go, the chart and reading for today’s very auspicious book launch day! 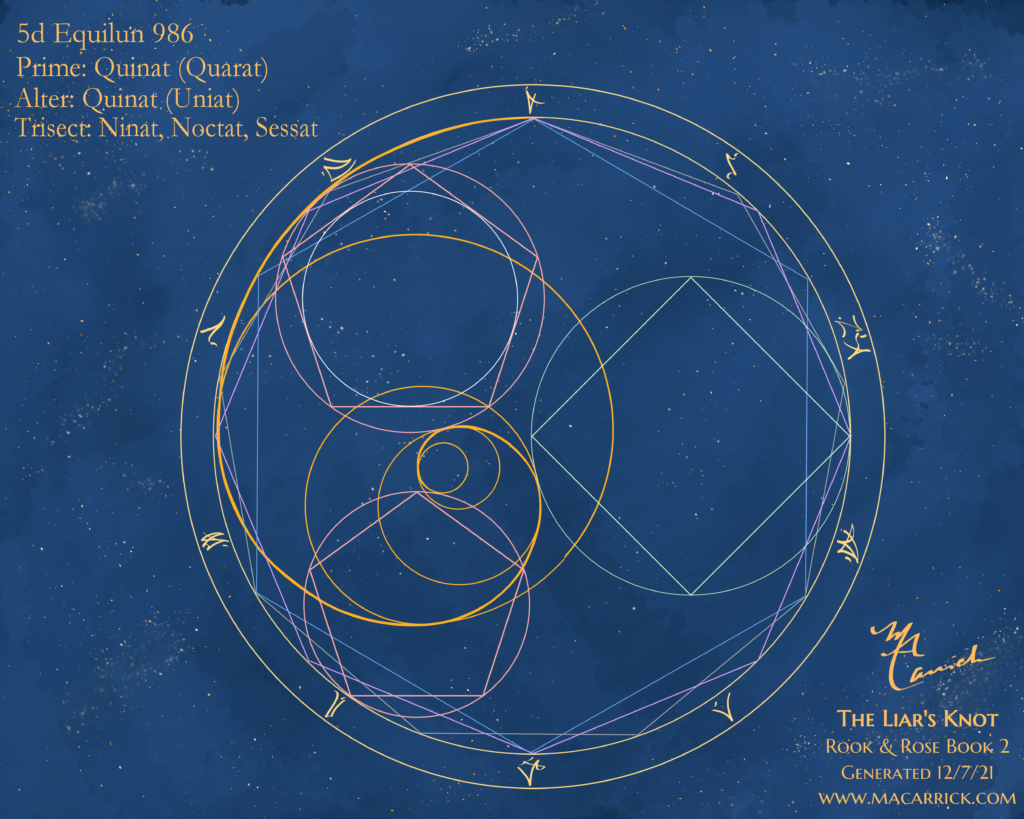 The Mask of Mirrors is a book shot through with textile metaphors, from slang terms like ‘knots’ for the gangs and ‘cuffs’ for the nobility; to the pattern deck and its suits of the spinning, woven, and cut threads; to the interweaving of multiple PoVs to create a dense cloak of intrigue. We didn’t consciously start out with that model in mind, but once we started crafting the world, the textile metaphors only got stronger.

However, one thread that isn’t metaphorical at all is the importance of clothing and fashion, something we knew from the beginning would be central to Ren’s ability to sell her con. There aren’t many human cultural universals out there, but the importance of clothing and fashion in determining whether a person is in-group or out-group might be one of the closest things to a constant that we’ve got. And Ren has her sister, Tess, who might not be able to weave lies with her words, but she can damn well tailor them into her clothing designs.

Something so intrinsic to the main plot couldn’t be handwaved (not that we wanted to!) We had to figure out a complex language of fashion in the same way we’d done with the magic, social, political, and economic systems. We’re fairly well-suited to this kind of work: Alyc has a hobbyist background in costuming for theater and historical re-creation, and although Marie likes to downplay it, she’s no slouch in the sewing department either.

For Nadežra, we knew we needed two ‘looks’ – one for the indigenous Vraszenians and one for the descendants of the colonizers from Seste Ligante (who follow the fashion changes from their parent countries). We also wanted a hybrid look for common Nadežrans – people who might have a mixed Ligante/Vraszenian heritage, but don’t have cultural ties to either group.

One of the silhouettes was dictated by the image we already had in mind for the Rook. That character was so closely tied to his conceptual forebears — Zorro, the Scarlet Pimpernel, the Dread Pirate Roberts, Ezio — that we had to dress him in a tailored coat resembling a justacorps or frock coat, and high leather boots so the coat could swing around the tops of the boots when he swashes and duels.

Look, we are simple people. We delight in simple pleasures. And one of them can best be summed up in a stanza from Alfred Noyes’ “The Highwayman”:

“He’d a French cocked-hat on his forehead, a bunch of lace at his chin,
A coat of the claret velvet, and breeches of brown doe-skin;
They fitted with never a wrinkle: his boots were up to the thigh!
And he rode with a jewelled twinkle,
His pistol butts a-twinkle,
His rapier hilt a-twinkle, under the jewelled sky.”

The Rook’s costume is a bit of an echo of a bygone era (his coat is of a longer, looser, more functional cut than current Liganti fashion trends), but in order to not make it seem like someone’s grandpa was running around on rooftops, we decided to take advantage of the old adage about fashion recurring in cycles. That let us have that same swishy skirted coat/waistcoat style for our contemporary Liganti look, with one of the main differences being colors (the current fashion is for pale neutrals and pastels) and preferred textiles (brocades, velvet, and satin-woven cottons and silks thanks to advances in technology and trade).

Little details like this might seem unimportant, but having them means we can figure out ways to use them — and use the fashion — to further the story. For example, pastels can be difficult to maintain, which means there are a lot of stained pieces at remnant stalls that Tess can pick up for cheap… which is one reason that trendsetter Renata begins setting a fashion for brighter, bolder colors and a more streamlined, tailored look. Dyeing is easier than bleaching, and tailoring means you can creatively use smaller pieces and less fabric!

With Vraszenians, it all came down to the textile metaphors we mentioned. They are central to Vraszenian culture, to the point where lineages are tracked by embroidery, hair braiding is an art, and knotwork charms abound. Thus the panel coat became the core of that silhouette – a simple design that allows Vraszenians to display their love of and appreciation for embroidery, blackwork, needlepoint, and other fabric manipulations in that vein.

Because fashion is so important, we want readers to experience it as more than a parade of descriptions of colors and clothing pieces. We explore the sensual elements of clothing like draping, layering effects, embroidery, and the ‘hand’ of the fabric. We want readers to feel the pile of the velvet under their fingers, hear the whisper of a lace overlay as it slides past the satin underneath, move with the weight and drape of the skirts of the Rook’s coat as he fights a duel. We want the clothes to feel lived in; we want our readers to want to live in them.

Lumen knows we do!

No scheduled appearances at this time.

Trust is the thread that binds us . . . and the rope that hangs us.

In Nadezra, peace is as tenuous as a single thread. The ruthless House Indestor has been destroyed, but darkness still weaves through the city's filthy back alleys and jewel-bright gardens, seen by those who know where to look.

Derossi Vargo has always known. He has sacrificed more than anyone imagines to carve himself a position of power among the nobility, hiding a will of steel behind a velvet smile. He'll be damned if he lets anyone threaten what he's built.

Grey Serrado knows all too well. Bent under the yoke of too many burdens, he fights to protect the city's most vulnerable. Sooner or later, that fight will demand more than he can give.

And Ren, daughter of no clan, knows best of all. Caught in a knot of lies, torn between her heritage and her aristocratic masquerade, she relies on her gift for reading pattern to survive. And it shows her the web of corruption that traps her city.

But all three have yet to discover just how far that web stretches. And in the end, it will take more than knives to cut themselves free...